Let's Look at the Bright Side!

Donald Trump: Let’s Look at the Bright Side

IMPORTANT NOTE AS OF JULY 1, 2020: This book was written in 2017, just six months into Donald Trump’s presidency. Admittedly, quite a lot has unfolded since then. HOWEVER, as testament to the keen analysis, astute extrapolation and prophetic insight of the author, every single page (we repeat, EVERY single page) of this book remains relevant even in July, 2020! Enjoy!

SIX MONTH into the presidency of Donald J. Trump.

• He sought to delegitimize the nation's first African American President.

• He campaigned as a racist, misogynist, sociopathic liar and xenophobe.

• He mocks the disabled.

• He wants to ban and deport all Muslims.

• He undermined the very foundation of the democratic election process.

• His wife is a plagiarist.

• His Chief Strategist is an avowed white nationalist. but wait, there's more...

• Belittled POWs and the war record of a sitting US Senator.

• Lied about how much money he raised for veterans.

• Accused an American-born federal judge of being unfit to do his job because of his Mexican heritage.

• Lied about seeing "thousands and thousands" of Muslims celebrating in New Jersey on 9/11.

• Lied about getting a letter from the NFL complaining about the debate schedule.

• Tried to exploit the death of an African American woman in Chicago to say that's why black voters will support him.

• Settled with the Department of Justice after his company was found guilty of racially discriminating against minorities.

• Has cheated on two wives.

• Was just discovered on video admitting that he not only tried to cheat on his current wife, but he attempted to do so with another married woman.

• Tweeted that women should have expected to be sexually assaulted when they mixed males and females together in the military.

• Said he wants to target the families of terrorists.

• Stated that he wants to ban an entire religion.

• Encouraged the Russian government to commit espionage against Americans.

• Insinuated that another Republican's wife was ugly.

• Tried to implicate another Republican's father in JFK's assassination.

• Sought the help of former Fox News CEO Roger Ailes after he was fired following multiple allegations that he had sexually harassed women for years.

• Made Breitbart's Steve Bannon one of his top campaign people.

• Said climate change was a hoax created by the Chinese, then denied saying it.

• Was the leading conspiracy theorist when it came to the racist-driven birther conspiracies against President Obama.

• Dismissed nearly eight years of accusing the president of not being an American with a less than 30 second statement where he didn't apologize for any of it and tried to blame Hillary Clinton for his racism.

• Played dumb about knowing who former Grand Wizard of the KKK David Duke was.

• Has, on several occasions, suggested he finds his daughter attractive.

• Called a husband doing things like changing diapers and helping with the children, a man "trying to be the wife."

• Has said he wants more countries to have nuclear weapons.

• Said he can't release his tax returns because they're currently being audited, even though the IRS said that's a lie.

• Feels he has the right to sexually assault women.

This is your President*. So, um, let's look at the bright side.... Note: This list was compiled in 2016 within the first two months of his presidency! And what is that bright side?

A physical book of BLANK pages to document the bright side of Donald Trump’s presidency! Order physical copies and send to friends to give them HOPE....at least until they open it.....!"

For Supporters and Protesters, alike:

Trump Supporter? use the blank pages to journal how your life has improved.

Protester?: use it to lighten the mood a bit during this otherwise gravely serious time.

Donald Trump. Let's Look at the Bright Side
by F.J. Sharp 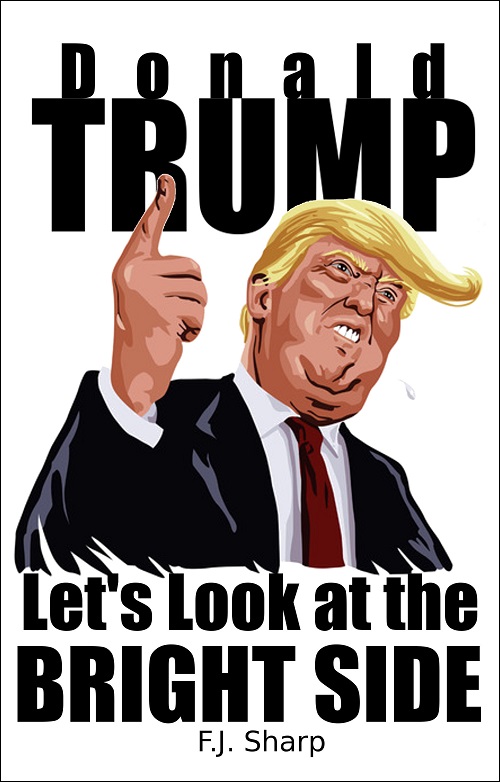